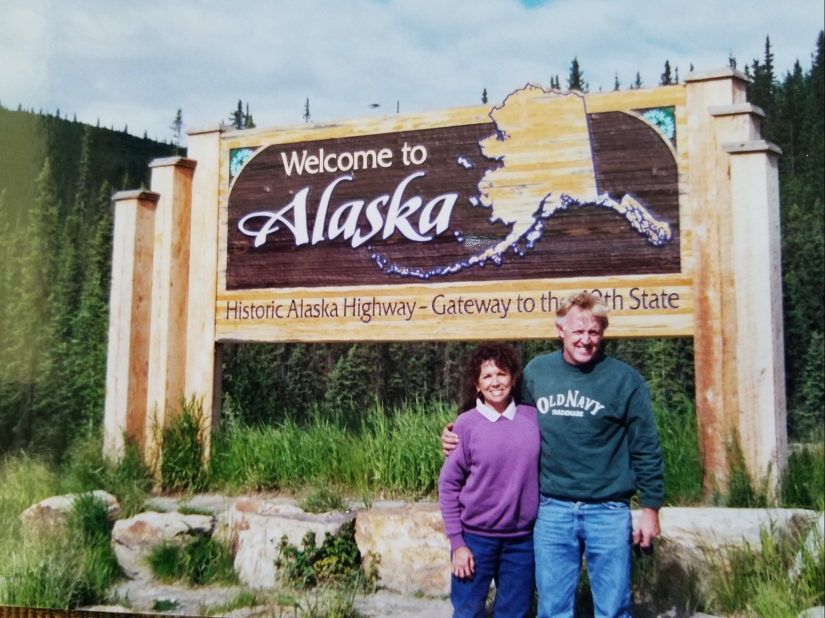 … when we took our Astro Van and a camper up there to live in while we worked on building our house. We entered Alaska via the Al-Can Highway, which was only partially paved back then, much pot-holed, and rather desolate for long distances. We never passed a gas station … we always stopped and filled up, for we were warned that you never knew how far away the next one would be. Remember, this 17 years ago, before we had driving technology!

We arrived “home” after eleven days on the road. Our building site was marginally ready, so we parked our camper in our neighbor Ben’s driveway. He let us run an electric cord to it, and a hose from his well. In Alaska, most folks are eager to help one another, and we certainly found this to be true on Lumberjack Lane. Yes, that’s really the name of our dead-end road. 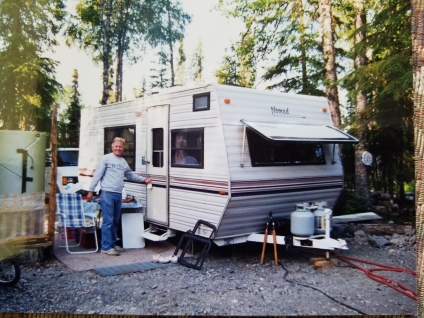 Backstory: On our vacation trip in 1999, we fell in love with Alaska and, on a whim, bought an acre and a third near Soldotna and the Kenai River. We tied neon-yellow plastic tape around all the trees we wanted cut out, and contracted with a land clearer and a well digger to take care of doing some work while we were back in Florida.

In 2000, we did not go up . We stayed home and saved money to pay for the work going on in our absence. Our neighbor Ben oversaw the preparation of our lot. He was having the same work done on his property, so he did that for us too. Amazing man! We had the trees removed, the house site and a short driveway prepared, a well dug, and septic system installed. 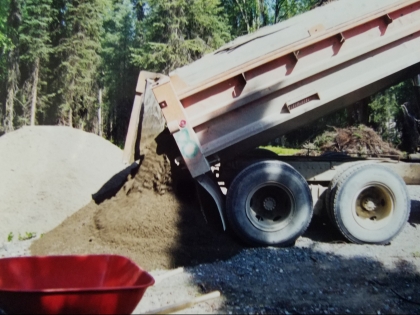 …discovered that we needed to raise the house site about a foot, so we hauled in more gravel, 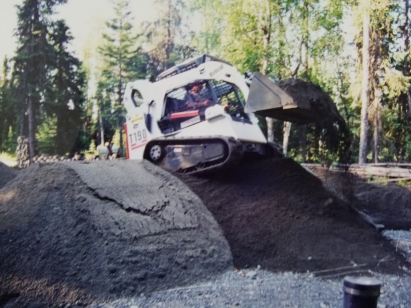 smoothed it out, and…

poured the 24 x 28 foot slab. Below, Tom is shoveling dirt over the exposed blue styrofoam insulation to keep the wildlife from eating it over the winter, all under the watchful eye of Mama Moose…

and her precious baby. 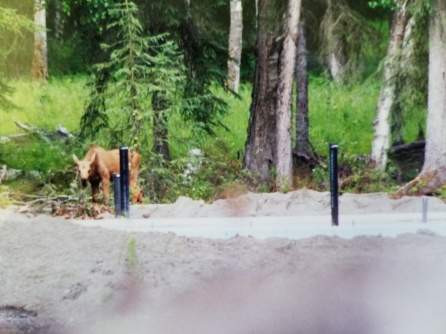 Mama moose have learned an advantage to giving birth in areas inhabited by humans. Berries and baby moose are the mainstays of a Grizzly bear’s diet until the salmon start to run in late July. A mama moose knows that bears are hesitant to venture close to people, so their babies are more protected there. A couple of years ago, a moose gave birth in a grocery store parking lot!

Moose are not at all afraid of people, though. We are very careful not to get between mama and baby. Cute though, aren’t they?

So, we put our vehicles in storage, and flew back to Florida until the next summer.

NOTE: These old photos were taken with my old 35 mm SLR film camera, prior to digital.

I am a born-again believer in the Lord Jesus Christ, who taught foreign languages for 25 years in Christian schools. Seven years ago I "retired" and returned to free-lance writing and illustrating. My husband Tom, our dog Jack and I spend summers in Alaska, fishing, writing, painting, and wildlife watching. We spend winters back in Florida, riding bikes, playing trumpet and piano, cooking, writing, painting, and enjoying great friends. View all posts by janeduquette